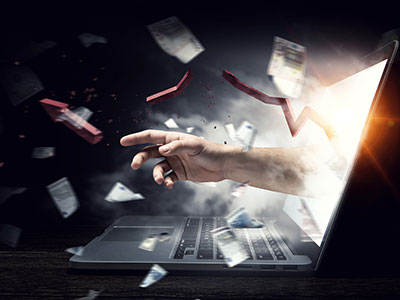 A group of computer scientists from Florida-based cyber security company, Cyxtera Technologies, are reported to have built machine-learning software that can generate phishing URLs that can beat popular security tools.

Using the Phishtank database (a free community site where anyone can submit, verify, track and share phishing data) the scientists built the DeepPhish machine-learning software that is able to create URLs for web pages that appear to be legitimate (but are not) login pages for real websites.

In actual fact, the URLs, which can fool security tools, lead to web pages that can collect the entered username and passwords for malicious purposes e.g. to hijack accounts at a later date.

Can Increase The Effectiveness of Phishing Attacks

Using Phishtank and the DeepPhish AI algorithm in tests, the scientists found that two uncovered attackers could increase their phishing attacks effectiveness from 0.69% to 20.9%, and 4.91% to 36.28%, respectively.

The effectiveness of AI algorithms is improved by ‘training’ them. In this case, the training involved the team of scientist first inspecting more than a million URLs on Phishtank. From this, the team were able to identify three different phishing attacks that had generated web pages to steal people’s credentials. These web addresses were then fed into the AI phishing detection algorithm to measure how effective the URLs were at bypassing a detection system.

The team then added all the text from effective, malicious URLs into a Long-Short-Term-Memory network (LSTM) so that the algorithm could learn the general structure of effective URLs, and extract relevant features.

All of this enabled the algorithm to learn how to generate the kind of phishing URLs that could beat popular security tools.

AI offers some exciting opportunities for businesses to save time and money, and improve the effectiveness of their services. Where cyber-security is concerned, AI-enhanced detection systems are more accurate than traditional manual classification, and the use of intelligent detection systems has enabled the identification of threat patterns and the detection of phishing URLs with 98.7% accuracy, thereby giving the battle advantage to defensive teams.

However, it has been feared for some time that if cyber-criminals were able to use a well-trained and sophisticated AI systems to defeat both traditional and AI-based cyber-defence systems, this could pose a major threat to Internet and data security, and could put many businesses in danger.

The tests by the Florida-based cyber-security scientists don’t show very high levels of accuracy in enabling effective defence-beating phishing URLs to be generated. This is a good thing for now, because it indicates that most cyber-criminals with even fewer resources may not yet be able to harness the full power to launch AI-based attacks. The hope is that the makers of detection and security systems will be able to use AI to stay one step ahead of attackers.